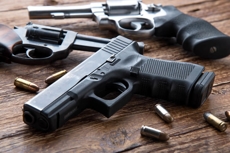 In the past we discussed unlawful possession of a firearm by a felon under Federal law. The same offense, while very different, can also be severe under Texas law. A Texas firearms lawyer can help you navigate these charges.

For example, a convicted felon may possess a firearm in the residence in which he lives once five years have elapsed from his release from prison or parole, whichever is later. Under Texas Penal Code §§ 12.33, 46.04, the unlawful possession of a firearm is a third degree felony with a punishment range of two to ten years for a defendant with one prior felony conviction and fine up to $10,000.

In legal terms, the word “possession” is an abstract term, but Texas courts, like most other state courts, have the defined as the term as follows: “Possession means actual care, custody, control or management. Possession is a voluntary act if the possessor knowingly obtains or receives the thing possessed or is aware of his control of the thing for a sufficient time to permit him to terminate his control.”

To be convicted as a felon in the unlawful possession of a firearm, the State must prove only that 1) a person, 2) who has been convicted of a felony, 3) possessed a firearm, 4) after conviction and before the fifth anniversary of the person’s release from prison or parole or other community supervision. Under Texas Penal Code § 6.01(a), the State must also prove the defendant voluntarily possessed the firearm.

But what if the firearm is not under the “exclusive possession and control” of the place where the firearm is found, e.g., a friend’s residence or vehicle? The State must then provide, as the courts have held, “evidence of circumstances, in addition to mere presence, that would adequately justify the conclusion that the defendant knowingly possessed the firearm.” This burden of proof can be satisfied with either direct or circumstantial evidence so long as the State connects the defendant to the firearm.

There are several nuances under Texas law that should be considered by a gun rights lawyer when evaluating a Felon in Possession case.

The State, in an indictment charging only unlawful firearm possession based on a predicate prior conviction, cannot use that same predicate offense to enhance the defendant’s sentence to a second degree felony subjecting defendant to a term of imprisonment up to 20 years.

Also, an order setting aside a defendant’s conviction and sentence to community supervision under Texas Code of Criminal Procedure Article 42.12(20) cannot be charged and/or convicted under § 46.04. Procedures under Art. 42.12 (20) are commonly referred to as “judicial clemency.” Under Art. 42.12(20), a judge who believes a person on community supervision who is completely rehabilitated and ready to return to society as a law-abiding citizen may set aside the guilty verdict or withdraw his guilty plea which led to the felony conviction. This procedure permits the judge to dismiss the accusation, complaint, information or indictment against the defendant which effectively releases the defendant from all penalties and disabilities from the offense to which the defendant had been convicted.

There is a caveat to this “judicial clemency” exception: The Court of Criminal Appeals held last year the prior conviction used in a § 46.04 case must have been set aside before the unlawful firearm possession offense occurred. For example, a felony conviction used as the predicate offense in an unlawful firearm possession case which is vacated and set aside after the § 46.04 possession case will not undermine a conviction obtained under that statute. This is consistent with a 1980 U.S. Supreme Court decision which held that a “constitutionally infirm” conviction can be used to enhance a sentence.

Under Section 5, “the judge may dismiss the proceedings and discharge a defendant, other than a defendant charged with an offense requiring the defendant to register as a sex offender … prior to the expiration of the term of community supervision if in the judge’s opinion the best interest of society and the defendant will be served.” If the judge elects to take this action, any dismissal and discharge from supervision “may not be deemed a conviction for purposes of disqualifications or disabilities imposed by law for conviction of an offense …”

There is also a true defense in a § 46.04 case. A defendant charged with unlawful firearm possession may use a defense of necessity which means that, under Texas Penal Code § 9.22, conduct is justified if (1) the actor reasonably believed the conduct to immediately necessary to avoid imminent harm, (2) the desirability and urgency of avoiding harm clearly outweigh, according to ordinary standards of reasonableness, the harm sought to be prevented by the law proscribing the conduct, and (3) the legislative purpose to exclude the justification claimed for the conduct does not otherwise plainly appear. Before this defense can even be contemplated, there must be evidence of both immediate necessity and imminent harm. Once a defendant makes this showing, the State must then disprove the defense through persuasion.

But it must be pointed out that two other common law defenses—self-defense and mistake or ignorance of the law—are not available in unlawful firearm possession cases.